For validation assays, expression clones were constructed in the psiCheck-AP vector that transcribes a chimeric mRNA. This chimeric mRNA contains both the targeted gene and a reporter gene that encodes secreted alkaline phosphatase (AP). The transcription level of targeted genes can be assayed by the enzymatic activities of AP as the result of unperturbed transcription and translation of this enzyme in the absence of shRNAs. Upon co-transduction of a shRNA clone and the corresponding psiCheck-AP expression clone, the destruction of the targeted gene mRNA by the targeting shRNA results in the degradation of the AP gene and,therefore, translation reduction of AP. The KD effect can be quantified by the colorimetric AP assay, which is illustrated in Figure 1. 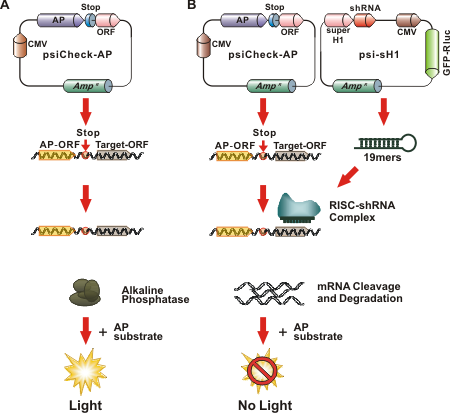 Fig. 1. Validation of shRNAs against human kinome members using vector(psi-sH1) mediated shRNAs and CMV driven expression clones (in psiCheck-AP) that contain target kinase ORFs and express alkaline phosphatase (AP) for colorimetric assays. A. In the absence of shRNA, AP is expressed and its activity is quantified by colorimetric assay. B. Co-transfection of shRNA and AP-ORF expression clones, chimeric mRNA for AP-ORF is destroyed and, subsequently AP translation and its activity is reduced.
The expression cassettes of all shRNA clones are fully sequenced, which includes the promoter, sense and antisense target sequences, hairpin, termination and other linker sequences. For human kinome shRNA clones in psi-sH1 vector, we provide 1 to 3 clones for each gene, all of which have been validated to have a KD effect of 70% of the original level using the surrogate colorimetric alkaline phosphatase assay. For lentiviral and mammalian vector based shRNAs, we provide 4 shRNA clone constructs for each gene. We guarantee that at least one of four shRNA constructs will have a KD effect of 70% on corresponding gene expression by 70% using at least one of the 4 aforementioned validation methods, provided that all verification experiments are conducted in strict adherence to the protocols and procedures provided by GeneCopoeia. After adequate trouble shooting procedure is complete and it is found that none of the four shRNA constructs can achieve guaranteed level of KD effect, we will supply a new set of 1 to 4 shRNA constructs free of charge.

1. Identify the gene of interest:

Please gather as much as possible of the following information: Gene Description, species, Nucleotide Accession, Entrez Gene ID, Symbols/Aliases or Catalog/product ID. You can also submit a sequence so we can search by target gene sequences homology (BLAST)

Alternatively, you can use the search tool by GeneCoppoeia - Search shRNA target by GeneCopoeia - and order the product ID result.


2. Choose the vector(s) of interest:

3. Fill out the order form:

Download the order form (order form) and fill with requested information. Send it back to us by email or FAX. We will contact you shortly to confirm: sequences, vectors and controls

Be the first to review this product

Use spaces to separate tags. Use single quotes (') for phrases.